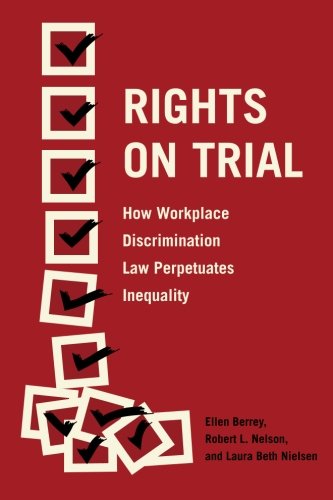 Brand : University Of Chicago Press
from USA
to UNITED STATES
in 5-8 days
At your doorstep by Dec 07  to Dec 10 with standard delivery

Gerry Handley faced years of blatant race-based harassment before he filed a complaint against his employer: racist jokes, signs reading “KKK” in his work area, and even questions from coworkers as to whether he had sex with his daughter as slaves supposedly did. He had an unusually strong case, with copious documentation and coworkers’ support, and he settled for $50,000, even winning back his job. But victory came at a high cost. Legal fees cut into Mr. Handley’s winnings, and tensions surrounding the lawsuit poisoned the workplace. A year later, he lost his job due to downsizing by his company. Mr. Handley exemplifies the burden plaintiffs bear in contemporary civil rights litigation. In the decades since the civil rights movement, we’ve made progress, but not nearly as much as it might seem. On the surface, America’s commitment to equal opportunity in the workplace has never been clearer. Virtually every company has antidiscrimination policies in place, and there are laws designed to protect these rights across a range of marginalized groups. But, as Ellen Berrey, Robert L. Nelson, and Laura Beth Nielsen compellingly show, this progressive vision of the law falls far short in practice. When aggrieved individuals turn to the law, the adversarial character of litigation imposes considerable personal and financial costs that make plaintiffs feel like they’ve lost regardless of the outcome of the case. Employer defendants also are dissatisfied with the system, often feeling “held up” by what they see as frivolous cases. And even when the case is resolved in the plaintiff’s favor, the conditions that gave rise to the lawsuit rarely change. In fact, the contemporary approach to workplace discrimination law perversely comes to reinforce the very hierarchies that antidiscrimination laws were created to redress. Based on rich interviews with plaintiffs, attorneys, and representatives of defendants and an original national dataset on case outcomes, Rights on Trial reveals the fundamental flaws of workplace discrimination law and offers practical recommendations for how we might better respond to persistent patterns of discrimination.
Show More
Reviews