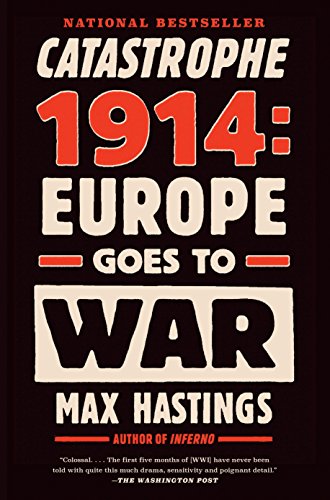 Amazon Guest Review of “Catastrophe 1914” by Max Hastings --------------------------------------------------------- By Scott Anderson Scott Anderson Author of Lawrence in Arabia: War, Deceit, Imperial Folly and the Making of the Modern Middle East, Scott Anderson is a veteran war correspondent who has reported from Lebanon, Israel, Egypt, Northern Ireland, Chechnya, Sudan, Bosnia, El Salvador and many other strife-torn countries. A contributing writer to the New York Times Magazine, his work has also appeared in Vanity Fair, Esquire, Harper's and Outside. He is also the author of novels Moonlight Hotel and Triage and of non-fiction books The Man Who Tried to Save the World and The 4 O'Clock Murders, and co-author of War Zones and Inside The League with his brother Jon Lee Anderson. To truly understand the grim march of twentieth century history, one must start with World War I – and to truly understand that horror show, one must look at its cataclysmic first few months. It was during this time that Europe saw sweeping military offensives, great pitched battles, and such staggering body-counts that the powers turned to the stagnation of trench warfare almost as a matter of national survival. This is the period British historian Max Hastings sets out to examine in Catastrophe, and the result is nothing short of a masterpiece. The power of this book operates on several levels. Due to the political and military complexity of World War I – as well as, perhaps, a certain nationalistic chauvinism – most histories of it tend to be decidedly local; a reader might learn a great deal about the battle of the Somme, for instance, but virtually nothing about what was occurring at the same time elsewhere. By deftly moving from one battlefront to the other, Hastings is able to create a mosaic of the carnage visited upon Europe in the opening days of the war, and to show how those fronts were interconnected. Certainly no other general World War I history that I’ve read gives the commensurate attention to the slaughters that occurred on the Serbian and Galician battlefronts in 1914 that Hastings provides here. To accomplish this, he has wisely avoided that tendency so common among military historians - barraging the reader with a blizzard of commanders’ names and regimental designations – that can make reading about combat such an ironically-dull task. Instead, by bringing us the voices of the young men from all sides caught in the maws of these battles, we not only get a visceral sense of what it looked and sounded and smelled like, but an appreciation for the commonality of the horror befalling them. Those wanting a tactical, blow-by-blow account of the Russian disasters at Tannenberg and Masurian Lakes, for example, will have to look elsewhere – Hastings dispenses with these twinned battles in a mere dozen pages – but for everyone else, the description of ordinary Russians slowly dawning to the realization that they are doomed is both wrenching and unforgettable. Perhaps most remarkable, given his focus on the personal and the small, telling detail, Hastings’ voice also carries the mantle of authority; very early on, the reader realizes the author has done the heavy spadework of examining the myriad political and military controversies of the period, and come to a studied conclusion. Chief among these is the enduring debate over who was most responsible for starting the war, and in recent years a whole spate of revisionist histories have sought to redirect blame toward Britain or France or – most improbably - Russia. While Hastings is ultimately dismissive of these alternate theories (it really was the Germans’ and Austro-Hungarians’ fault), he does so decorously and only after entertaining the revisionisms long enough to show their contradictions. Similarly, the battlefield decisions of Sir John French, the first British field marshal of the war, have been argued over for nearly a century now, but it’s very hard to see what needs to be added to Hastings’ elegant comment that French’s conduct, “in the field was little more egregious than that of his counterparts of the other European armies.” In contemplating this project, it surely crossed Hastings’ mind that his book would inevitably be judged against another work that covers almost precisely the same time period, Barbara Tuchman’s 1962 classic, The Guns of August. With Catastrophe, that period now has two classics.
Show More
Reviews