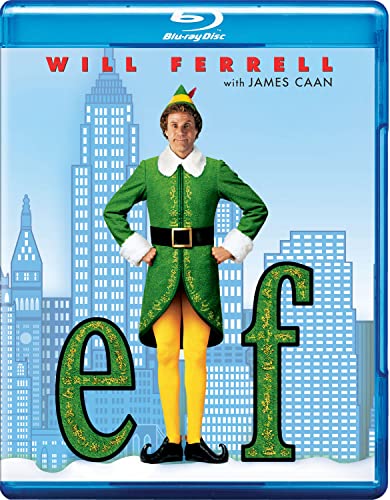 Product Description ------------------- Elf (BD) One Christmas Eve a long time ago, a baby crawled into Santa's bag of toys. Raised as an elf, Buddy grows into an adult three times larger than the biggest elf--and realizes that he will never truly fit in at the North Pole. This holiday season, Buddy goes looking for his true place in the world--in New York City. Buddy finds his workaholic father … who's on Santa's "naughty" list, a new mother and a 10-year-old brother who doesn't believe in Santa Claus or elves. Here, now, Buddy discovers his destiny … to save Christmas for New York and the world! Starring Golden Globe and Emmy Award-nominee Will Ferrell (“Talladega Nights: The Ballad of Ricky Bobby,” TVs “Saturday Night Live”), Academy Award, Golden Globe and Emmy Award-nominee James Caan (“The Godfather”), Golden Globe-winner and Emmy Award-nominee Bob Newhart (TVs “Newhart”), Golden Globe and Emmy Award-winner Edward Asner (“JFK”), Academy Award and Golden Globe-winner Mary Steenburgen ("The Brave One") and Zooey Deschanel (“Failure to Launch”). ]]> .com ---- Elf is genuinely good. Not just Saturday Night Live-movie good, when the movie has some funny bits but is basically an insult to humanity; Elf is a smartly written, skillfully directed, and deftly acted story of a human being adopted by Christmas elves who returns to the human world to find his father. And because the writing, directing, and acting are all genuinely good, Elf is also genuinely funny. Will Ferrell, as Buddy the adopted elf, is hysterically sincere. James Caan, as his rediscovered father, executes his surly dumbfoundedness with perfect aplomb. Zooey Deschanel, as a department store worker with whom Buddy falls in love, is adorably sardonic. Director Jon Favreau (Swingers) shepherds the movie through all the obligatory Christmas cliches and focuses on material that's sometimes subtle and consistently surprising. Frankly, Elf feels miraculous. Also featuring Mary Steenburgen, Bob Newhart, Peter Dinklage, and Ed Asner as Santa Claus. --Bret Fetzer Stills from Elf (click for larger image) ( https://images-na.ssl-images-.com/images/G/01/dvd/warner/Elf_1lg.jpg ) ( https://images-na.ssl-images-.com/images/G/01/dvd/warner/Elf_2lg.jpg ) ( https://images-na.ssl-images-.com/images/G/01/dvd/warner/Elf_3lg.jpg ) ( https://images-na.ssl-images-.com/images/G/01/dvd/warner/Elf_4lg.jpg )

Browse pages with similar products: christmas romance movies, desertcart delivers over 100M+ products to United States of America from around the world.

Where can I buy Elf [Blu-ray] online at the best price in the UNITED STATES?

desertcart is the best online shopping platform where you can buy Elf [Blu-ray] from renowned brand(s). desertcart delivers the most unique and largest selection of products from across the world especially from the US, UK and India at best prices and the fastest delivery time.

Is Elf [Blu-ray] available and ready for delivery in UNITED STATES?

Is it safe to buy Elf [Blu-ray] on desertcart?

Yes, it is absolutely safe to buy Elf [Blu-ray] from desertcart, which is a 100% legitimate site operating in 164 countries. Since 2014, desertcart has been delivering a wide range of products to customers and fulfilling their desires. You will find several positive reviews by desertcart customers on portals like Trustpilot, etc. The website uses an HTTPS system to safeguard all customers and protect financial details and transactions done online. The company uses the latest upgraded technologies and software systems to ensure a fair and safe shopping experience for all customers. Your details are highly secure and guarded by the company using encryption and other latest softwares and technologies.