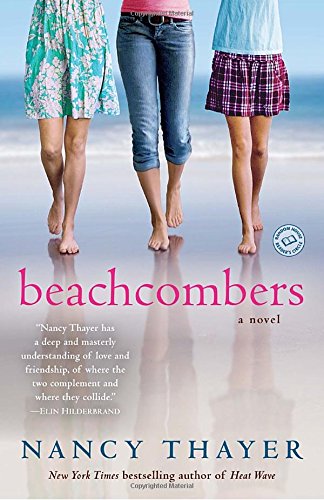 Elin Hilderbrand Reviews Beachcombers by Nancy Thayer Elin Hilderbrand is the author of The Island, forthcoming in July 2010, as well as the New York Times bestseller, The Castaways. She lives on Nantucket with her husband Chip and their three children. Read her review of Beachcombers: To quote some really old, really good Lionel Richie, Nancy Thayer’s newest novel, Beachcombers, is easy like a Sunday morning. It’s the kind of book you can trust to fulfill all your expectations; it will leave you feeling optimistic and satisfied. It is a cinnamon-colored cat kind of a novel; it is a hot mug of ginger tea kind of a novel. The book tells the story of the Fox family-–father Jim, who has lost his wife to depression/suicide-–and his three lovely daughters. The daughters congregate in the family home on Nantucket Island when the middle daughter, Emma, suffers a broken engagement and the loss of her job and savings. Older sister Abbie flies home from London where she has been working as an au pair, and Lily, the spoiled daughter, done as well as Amy March, gets her very pretty feathers ruffled when Abbie and Emma bond over her head, leaving her out, even though she is the one daughter who has remained on the island at home with their father. Also on the scene this summer is renter Marina, who is reeling from one of those hideous heart-rending shocks-–after trying to have a baby with her husband for years, her husband confesses that he in love with her best friend and not only that but the best friend is pregnant. Thankfully, Jim Fox is just what the cardiologist ordered. Thayer documents the girls’ return home to the island they love beautifully. I have lived on Nantucket for seventeen years myself and I found that in reading Thayer’s novel it was at once familiar and brand new. The three girls start an odd jobs business called Nantucket Mermaids and Thayer has these girls hopping-–from landscaping in the morning to reading to the elderly in the afternoon to babysitting at night. Just reading this novel, I was exhausted--and impressed-–and boy did I sympathize when youngest daughter Lily didn’t find time to make it to the grocery store! The odd jobs put the girls in position to meet new leading men, and they all do, though a seasoned reader wonders if they’re not moving a bit too fast. It’s not a worry that sticks, however. In Thayer’s expert hands, you just know that even if the relationships don’t last, her charming and self-aware characters are going to be just fine. Nancy Thayer on Beachcombers Twenty-seven years ago, I’d been divorced for three years. I lived with my small son and daughter, our two cats and one dog, in a Massachusetts college town. I’d dated a bit, unsuccessfully, and I was feeling so pessimistic about romance that I decided I’d forget men and buy a horse. Seriously. Then I came to Nantucket for the first time to visit a friend, and I met a friend of hers--a man named Charley, tall, blue-eyed, kind, who read books and owned a record store. We sat up all night talking, and now we’ve been married twenty-five years. Since then I’ve believed in the healing power of this island. And also in the healing power of change. Of taking a chance. Of dragging ourselves out of our pity pit and trying something new. In Beachcombers, Marina comes to the island to heal. She meets a wonderful man--and she meets his three adult daughters, who are dealing with their own fears, losses, and desires. Emma has lost her fiancé, her job, her plans, her dreams. She’s come home defeated, hopeless and apathetic. Lily, the baby, wants glamour and excitement and pretty clothes. She also wants someone else to do the dishes. Abbie, at thirty, the oldest, has been the nurturer ever since their mother died when Abbie was fifteen and Lily was only seven. Abbie hasn’t had a chance to consider what she wants, and she’s surprised when she finds that what she wants is a man who’s already taken. Healing isn’t an easy process, and change isn’t easy either, as the sisters and Marina discover. The four women strive and dream and discover that life has surprises in store for them. It’s like beachcombing--you never can guess what’s going to be lying there, waiting for you. Or whether you’re going to be brave enough to take what life offers, or strong enough to take it all. Only seashells on the beach can be lifted away easily and free. I’ve dedicated this book to my younger sister, Martha, who has always been so important in my life. I’m fascinated by sisters, and by families. It seems that those we struggle with are often the ones who also heal us--and who care that we are healed. There are many kinds of romantic and family love in Beachcombers, as in life.
Show More
Reviews