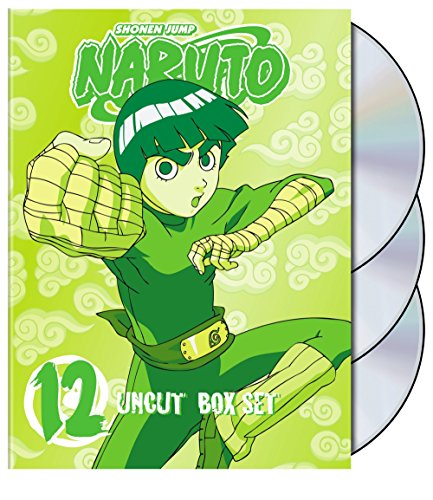 The 12th Box Set of Naruto bridges Seasons 6 and 7 of the hit ninja comedy-adventure. While Naruto waits for Jiraiya (a.k.a. "Pervy Sage") to return to the Hidden Leaf Village and continue his training, he goes on a series of short missions that allow the filmmakers to develop some of the secondary characters. Shy Hinata, who nurtures a secret crush on Naruto, proves she's an able warrior in her own right with a spectacular new jutsu of her own creation. Rock Lee, who can't use magical techniques, proves the efficacy of his exhaustive physical training by fending off the lightning-wielding Raiga while unconscious. Director Hayato Date plays the drama of the battle against Raiga and his lightning swords against some unusually broad comedy. Lee, Tenten, Neji, and Naruto use a little old lady's "Curry of Life" like Popeye's spinach: It restores consciousness, heals injuries, and builds fighting power. But it's so incredibly spicy, only Lee enjoys it (and even he turns scarlet after the first bite). Naruto blows the mission to capture the rare Bikoshu Beetle--literally and figuratively--with a badly timed attack of flatulence. An outdoor test for a class of student-ninjas showcases both Naruto's bad habits (his idea of living off the land is to stock up at a convenience store before heading into the forest) and his unshakable determination. The characters have a different look in these episodes that suggests Studio Pierrot changed ink and paint systems and, possibly, some key clean-up artists during production. The Special Edition comes with a "mininja" figure of Rock Lee. (Rated T+ Older Teen; suitable for ages 12 and older: violence, grotesque imagery, nudity, toilet humor, alcohol and tobacco use) --Charles Solomon (150. A Battle of Bugs! The Deceivers and the Deceived!151. Blaze Away, Byakugan! This is My Ninja Way! 152. Funeral March for the Living, 153. A Lesson Learned! The Iron Fist of Love! 154. The Enemy of the Byakugan, 155. The Dark Creeping Clouds, 156. Raiga's Counterattack, 157. Run! The Curry of Life! 158. Follow My Lead! The Great Survival Challenge! 159. The Bounty Hunter from the Wilderness, 160. Hunt or Be Hunted?! Showdown at the O.K. Temple! 161. The Appearance of Strange Visitors, 162. The Cursed Warrior, 163. The Tactician's intent)
Show More
Reviews