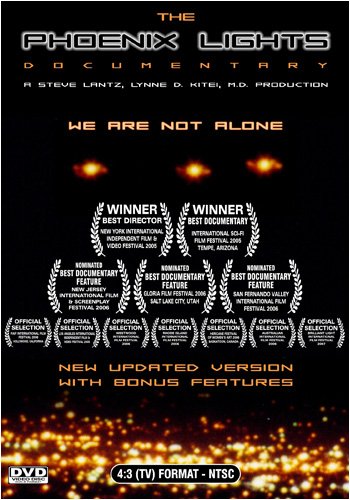 WORLDWIDE RELEASE OF THE NEW ANNIVERSARY EDITION Celebrating the historic and still unexplained Arizona mass sighting of 1997. Executive producer, writer, director & key witness, Lynne D. Kitei, M.D., in collaboration with producer & cinematographer, Steve Lantz, share riveting NEW data and personal interviews in this updated version of the internationally critically acclaimed and award winning Documentary. Plus BONUS FEATURES. During the evening of March 13, 1997, a mile-wide, V-shaped formation of lights (that seemed to be attached to something) slowly and silently traversed throughout Arizona at a very low altitude for many hours. The inexplicable and awesome event was witnessed by thousands of people, while they were looking up at the sky, purposely to catch a glimpse of the Halle-Bopp Comet. The significant statewide incident garnering headline news, catching the attention of USA Today, CNN, MSNBC, The Discovery Channel, EXTRA, national morning TV shows, as well as the Evening News with Tom Brokaw and Dan Rather. UFO buffs call it the most documented and important mass sighting ever recorded. But still today, the military and government can only offer questionable explanations as to what the anomalous lights truly were. In over 11 years, the strange phenomena have never been duplicated or re-enacted [although the military tried fruitlessly, three years later]. Many experts and witnesses insist that what appeared in the Arizona skies was something beyond this world. Based on the bestselling book, "The Phoenix Lights...A Skeptic's Discovery That We Are Not Alone", over 30 credible eyewitnesses, children, scientists, military, pilots and experts give compelling testimony to the reality of these mysterious global visitations. NEW sightings, NEW information and NEW interviews plus BONUS FEATURES: * Former AZ Gov. Fife Symington discloses that he witnessed the event and it wasn't military! * Astronaut & moon walker Dr. Edgar Mitchell, Sc.D. confirms that these unexplained phenomena are real and addresses the UFO cover-up! * A Commercial & Vietnam pilot witnessed the silent, mile wide craft glide above his head! * A Veteran 911 Phoenix Police operator tells all about that fateful night! * Coincidences on March 13th 1997? * Why the Phoenix Lights were not Military Flares - A Pilot's Perspective * WWII French Air Force Pilot Describes His FOO Fighter Experience * NASA footage confirming that these phenomena are here! * Spectacular August 30th 2005 & 2006 sightings! What are they? How did they affect the witnesses? What do they mean? View the 2 minute trailer at /watch?v=VhAQrR8Jhkk THERE IS MUCH MORE TO THE STORY THAN MARCH 13, 1997! This product is manufactured on demand using DVD-R recordable media. Amazon.com's standard return policy will apply.
Show More

The Phoenix Lights ... We Are Not Alone Documentary