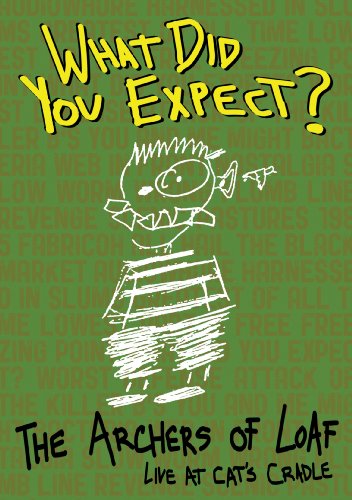 Combining in-your-face concert footage along with rare interviews of the band, WHAT DID YOU EXPECT? documents the Archers of Loaf s 2011 reunion tour and captures the excitement and explosive energy of two hometown concerts played at Cat's Cradle in Chapel Hill, NC. Archers of Loaf were the greatest indie rock band of the 90s, says director GormanBechard. No one had more energy on stage. No one put out better records. And to be able to capture that power on film was a challenge and a thrill. The film features twenty songs with concert audio produced by the legendary Brian Paulson. Included are favorites such as Audiowhore, Web In Front, and Harnessed In Slums, as well as rarities like Bacteria and All Hail the Black Market. Interspersed between the live performances are interviews with all four band members on subjects ranging from how exactly they came up with what is considered one of the worst band names of all time, to what s changed about life on the road since 1991, and how they actually miss their old van. I wanted the film to be as in-your-face and balls-to-the-wall as the band is on stage, the director explains. We used seven cameras, most hand-held, to make what I truly believe is one of the most exciting concert films of all time. You will feel as if you re at the show, right up against the stage, moving and sweating in unison with the hundreds of fans pressed up against you. TRACK LISTING: Audiowhore, Harnessed in Slums, Greatest of All Time, Lowest Part is Free, Freezing Point, What Did You Expect?, Worst Defense, Attack of the Killer B s, You and Me, Might, Bacteria, Web in Front, Nostalgia, Slow Worm, Wrong, Plumb Line, Revenge, Scenic Pastures, 1985/Fabricoh, All Hail the Black Market. The DVD also features 4 additional interviews, and 6 extra songs: Dead Red Eyes, Strangled by the Stereo Wire, Form and File, Let the Loser Melt, Step Into the Light, Smoking Pot in the City.
Show More

Archers Of Loaf - What Did You Expect? Archers of Loaf Live At Cat's Cradle