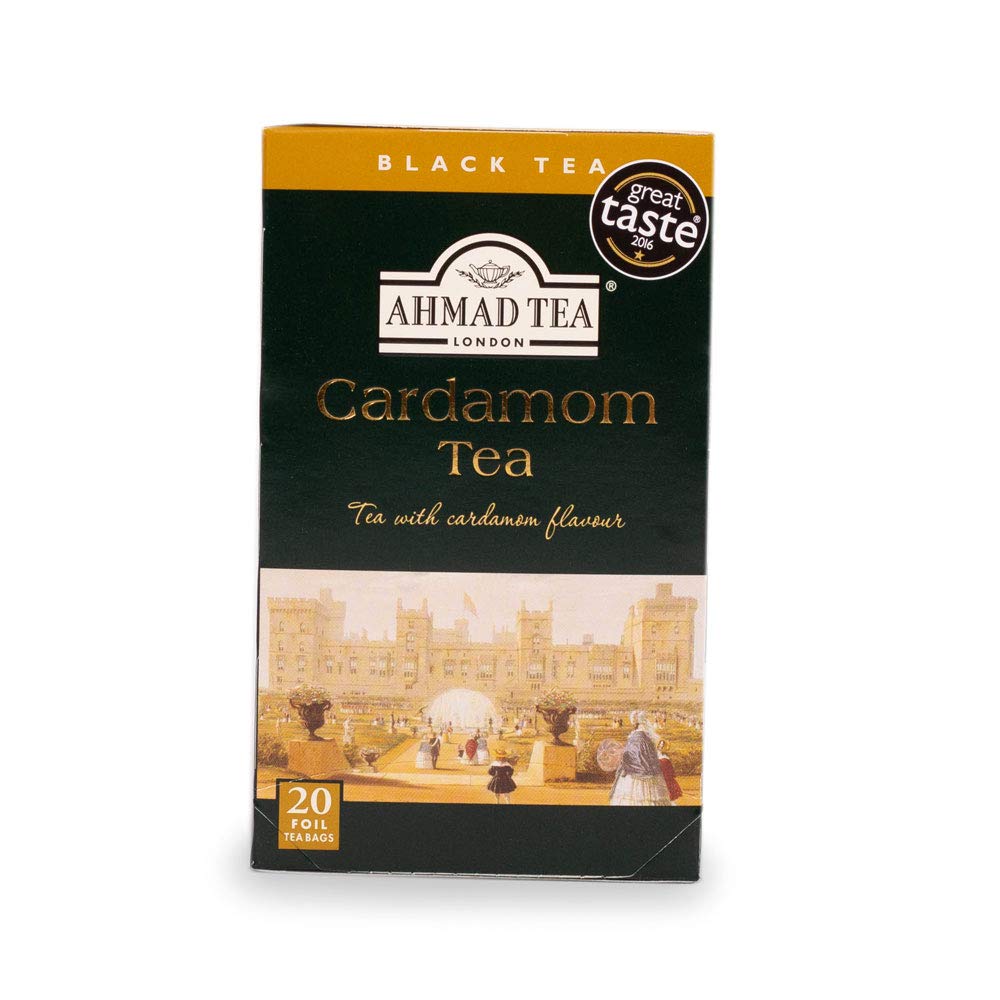 Size Name:1 Pack Ahmad Tea’s Cardamom Tea is a uniquely flavoured, exotic brew that fans of our Earl Grey or Chai Spice will love. It is actually our best-selling tea worldwide. To make it, our Tea Masters create a black tea blend featuring lots of quality Kenyan leaves. This gives the brew its crisp but mature character – a perfect backdrop for the uniquely herbal, slightly menthol green cardamom. We use a special cardamom flavour that complements the black teas with its warm aromatic spiciness. Cardamom is a popular spice across Asia, the Middle East and Europe. In India it’s used in savoury and sweet dishes – from rice biryanis to creamy desserts – while in Turkey and Lebanon it’s ground into coffee. The Scandinavians love it to flavour their baking, while recently, chefs in the UK have been experimenting with cardamom and chocolate. At Ahmad Tea, though, we still think it’s best in a brew, adding its exotic aroma to a nice cuppa… Ahmad Tea’s Cardamom Tea makes a versatile brew. Served lightly steeped it’s like a more exotic Earl Grey. Enjoy it like they do in the Middle East by serving it strong, black and with lots of sugar. Alternatively, drink it well brewed with a splash of milk as a rich, soothing cuppa, similar to a warming spiced chai tea. Each bag comes individually foil-wrapped. We’re proud to say our Cardamom Tea was recognised by the Great Taste Award. The judges praised the tea for having a ‘bright infusion, with a clean flavour coming through’. The box shows James Baker Pyne’s Eastern View of the Castle and Garden, Windsor Castle, 1838, a scene dominated by the castle’s magnificent garden fountain. Ahmad Tea is a family-run British business built on four generations of tea expertise. For over 25 years, we have pioneered high quality, great-tasting tea in more than 80 countries worldwide. It is our mission to ‘improve lives, one cup of tea at a time’ and we are proud to give back by leading major charitable projects. These include child welfare, clean water, hospitals and more in both the UK and further afield. We also work with the Ethical Tea Partnership to ensure sustainability is at the heart of our sourcing. It's said that every day, 29 million cups of Ahmad tea are enjoyed around the world. In which case, it must be time to put the kettle on…. Ingredients ----------- Black tea, Cardamom flavouring P.when('A').execute(function(A) { A.on('a:expander:toggle_description:toggle:collapse', function(data) { window.scroll(0, data.expander.$expander[0].offsetTop-100); }); }); Directions ---------- Step 1: Place the teabag in a cup. Step 2: Fill the kettle with freshly drawn water and allow it to fully come to the boil. Step 3: Pour the boiled water straight onto the teabag in the cup. Leave for at least 3 minutes to give the tea time to brew properly. Step 4: Give the teabag a squeeze with a teaspoon as you remove it from the cup. Step 5: Add milk, lemon or sugar to taste. Manufacturer Contact Information -------------------------------- Ahmad Tea, Winchester Road, Chandler's Ford, SO53 2PZ, UK See more ( javascript:void(0) )
Show More
Reviews