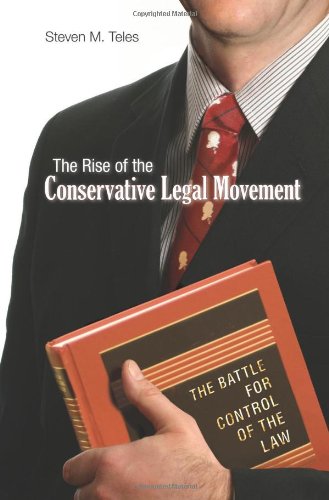 Brand : Brand Princeton University Press
from USA
to UNITED STATES
in 5-8 days
At your doorstep by Dec 07  to Dec 10 with standard delivery

Starting in the 1970s, conservatives learned that electoral victory did not easily convert into a reversal of important liberal accomplishments, especially in the law. As a result, conservatives' mobilizing efforts increasingly turned to law schools, professional networks, public interest groups, and the judiciary--areas traditionally controlled by liberals. Drawing from internal documents, as well as interviews with key conservative figures, The Rise of the Conservative Legal Movement examines this sometimes fitful, and still only partially successful, conservative challenge to liberal domination of the law and American legal institutions. Unlike accounts that depict the conservatives as fiendishly skilled, The Rise of the Conservative Legal Movement reveals the formidable challenges that conservatives faced in competing with legal liberalism. Steven Teles explores how conservative mobilization was shaped by the legal profession, the legacy of the liberal movement, and the difficulties in matching strategic opportunities with effective organizational responses. He explains how foundations and groups promoting conservative ideas built a network designed to dislodge legal liberalism from American elite institutions. And he portrays the reality, not of a grand strategy masterfully pursued, but of individuals and political entrepreneurs learning from trial and error. Using previously unavailable materials from the Olin Foundation, Federalist Society, Center for Individual Rights, Institute for Justice, and Law and Economics Center, The Rise of the Conservative Legal Movement provides an unprecedented look at the inner life of the conservative movement. Lawyers, historians, sociologists, political scientists, and activists seeking to learn from the conservative experience in the law will find it compelling reading.
Show More
Reviews

The Rise of the Conservative Legal Movement: The Battle for Control of the Law (Princeton Studies in American Politics: Historical, International, and Comparative Perspectives)